This is a single blog caption

Few things compare the feeling of accomplishment you achieve when you’re able to sail your yacht WHEREVER and WHENEVER you desire.  An even larger accomplishment is making a “top 10 list”, today we will be sharing the Top 10 Celebrity Yachts.  These yachts and mega yachts are sure to fascinate as they have extremely sleek and stylish exterior features/design, lavishly appointed interiors, and power plants that produce mind boggling amounts of torque and horsepower – essentially these monstrosities are floating palaces custom built for their respective king or queen!

From rapping and music making to his famous, now mainstream vodka—Cîroc, P. Diddy has made himself known around the world.  It is also apparent that his taste for boats is as on point as his rap game and vodka game.  Maraya was built in 2008 by CRN, the name Maraya is Arabic for “many mirrors”, this theme can be seen in many areas of the boat, especially in the Master suite!  Like any good boat, Maraya has a sun deck that transforms into a helipad!  Other onboard entertainment includes a ski boat, 2 jet skis, 4 kayaks, and 12 sets of dive gear.

Well known actor Johnny Depp comes in at 4th place on our list with his “Pirates of the Caribbeanesk” boat.  Vajoliroja was named after his girlfriend (Va), himself (Jo), his daughter Lily Rose (LiRo), and his son Jack (Ja).  Whatever you, don’t try to say Vajolirojo 3 times fast… you may hurt yourself!  Depp mainly uses the boat to go to his private island, Little Hall’s Pond Cay, located in the Bahamas.

Spielberg’s super-yacht, The Seven Seas at 282 feet is as gargantuan as his reputation as a film producer!  After completion of The Seven Seas, Spielberg, who got sick during the filming of Jaws decided to take her on a voyage around the world, traveling approximately 30,000 miles.  The coolest (but not surprising) feature on this monstrosity is a 15’ glass wall (located near the infinity pool) doubles as an outdoor movie screen.  In addition there is an over-sized movie screen in the main salon with theatre style seating for your viewing pleasure.  Now THAT’S A BOAT!

American business man David Geffen has an impressive resume of business he has founded/co-founded, some include; Asylum Records, Geffen Records, and DreamWorks SKG.  To go along with his impressive businesses is his toy collection.  At 453 feet, one toy inparticular may be slightly too large for the toy chest, Rising Sun.  This beauty is truly breathtaking!  It is capable of holding 16 guests in it 8 luxurious onboard cabins, and a crew of 45 in their crew quarters that consists of 30 rooms!

This ship was built by Lurssen Yachts, it boast an impressive 28 knot top speed, and an even more impressive 49,000 horsepower.

Chelsea football club (soccer) owner Roman Abramovich is said to be one of the wealthiest men in the world, in our opinion the purchase of this yacht backs that statement up nicely.  Quite impressively this boat was purchased in 2008 during the global financial crisis.  Her name is Eclipse, and she takes 1st place by a long shot, she measures a whopping 536 feet, has a top speed of over 20 knots, has 2 helipads, 15 top of the line state rooms, and a 16-meter swimming pool.  For security this mega-mega-mega yacht comes equipped with an anti-paparazzi laser net that prevents pictures from coming out clearly, bulletproof windows, and a submarine that can dive to 50 meters.  If you’re unable to make a 007 style getaway in this boat, you may as well wave the white flag as your enemy clearly has you outgunned! 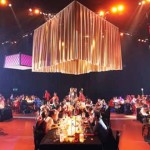 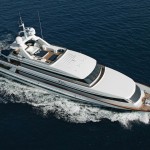